If you haven’t noticed yet, I make a lot of Ree Drummond recipes, aka The Pioneer Woman. She has a lot of simple, tasty, and hearty meals. This one is no exception. It is a spin on a classic Chinese take-out recipe that will have you not wanting to order Chinese take-out any more. Her recipe called for it to be served over Chow Mein noodles, but I served it over a simple Jasmine rice.

It is adapted very slightly. She calls for 1/2 cup of low-sodium soy sauce, but in my mind that makes it much too salty. I reduced it to 1/4 cup and also left off any more salt being added, which she calls for additional salt to taste. Trust me, you do not need any additional salt. 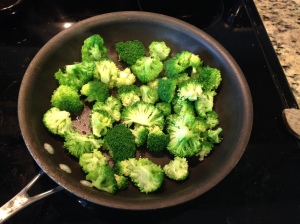 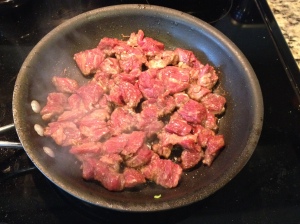 1 pound flank steak, trimmed of fat and sliced very thin against the grain

In a bowl, mix together the soy sauce, cornstarch, sherry, brown sugar, ginger and garlic. Pour half the liquid over the sliced meat in a bowl and toss with your hands. Reserve the other half of t he liquid and set aside.

Heat the oil in a heavy skillet (iron is best) or wok over high heat. Add the broccoli and stir for a minute. Remove to a plate.

Allow the skillet to get very hot again. With tongs, add the meat in a single layer. Spread out the meat as you add it to skillet, but do not stir for a good minute. (You want the meat to get as brown as possible in as short amount a time as possible.) Turn the meat to the other side and cook for another 30 seconds. Remove to a clean plate.

Adapted from The Pioneer Woman

2 thoughts on “Beef with Broccoli”

Find what you are looking for

AN INVASION OF YOUR TASTE BUDS

My Meals are on Wheels

Life and Cooking from a Wheelchair

Chocolate and other remedies

Recipes so Good no-one will know you're Cheap!

Cooking Up The Pantry

Mikey's In My Kitchen

Cooking For An Inspirational Eater

Lady Melady: My Castle, My Food

Learning how to cook one step at a time, sharing terrible photos and awesome recipes, and having fun doing it!

An informative guide for healthy, smart and knowledgable consumption of local produce.

The Not So Creative Cook
LisaListed

The best things in life aren't things at all